Jack O' Lantern will appear in town after Mystery Time between 29th and 31st October. Upon speaking to Jack O' Lantern, the player will be given the option to choose between "Trick" or "Treat".

If a player selects 'Trick', Jack O' Lanter will transorm the player into a copy of himself before disappearing. Jack will then disguise himself as a student and will hide somewhere in town. There is no way to distinguish between Jack O' Lantern and a villager.

Once the player finds him and speaks to him, they will be rewarded with an item from the Halloween Series.

After the Mystery has been solved, Jack O' Lantern will remain in the town, allowing players to continue collecting items from the series. 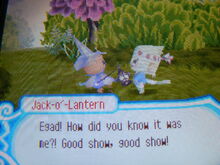 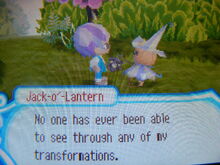 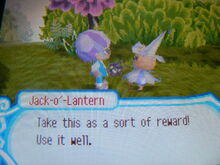 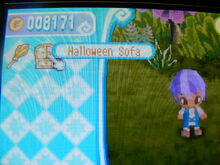 Retrieved from "https://enchantedfolk.fandom.com/wiki/Jack_O%27_Lantern?oldid=4619"
Community content is available under CC-BY-SA unless otherwise noted.