The River is filled with Trash and strange green monster is seen around town. Students that see this creature will run in fear and tell players of it's presence, other students will focus on the amount of trash in the water. Some students will blame the creature.

Players must attempt to comunnicate with the creature. This will reveal it's name "Mokele-mbembe".

Upon first contanct with the Mokele-mbembe, it will be angry and aggressive. Talking to other students will reveal  that there are legends of a beautiful creature that lives in the river, and that they've encountered a similar looking creature of the wrong colour. Other students will mention seeing a monster who's colour matches the colour of the dirty river river. Students may also suggest that the player helps them to clean up the trash.

Players must keep fishing up trash from the river. Talking to the Mokele-mbembe between gradually collecting trash will show it's mood eventually becoming better and better until it is completely happy, at which point it will dissappear. Players will then find the Mokele-mbembe facing The Waterfall beside the Haunted House.

As the player approaches it will return to it's true form and reveal itself to the player as The Goddess of The Waterfall. The Mokele-mbembe will then thank the player and leave the town.

Mokele-mbembe's silhouette at the start of Mystery Time

A player upon first encountering the Mokele-mbembe

The Mokele-mbembe at The Waterfall

The Mokele-mbembe before leaving
Add a photo to this gallery

Players must discover the location of the missing Gargoyle from the School lobby. The Gargoyle will then ask players to bring different "stimulating foods" to the Gargoyle to help it to stay awake. Players can talk to other students for advice on which foods they believe are most stimulating.

The Gargoyle can be found in the very back of The Cave.

Players must bring different "stimulating foods" one at a time to the Gargoyle. These foods include:

The Gargoyle will then ask players to bring all the foods they had previously brought at once. After bringing five different edible items, including all three listed above, the Gargoyle will thank the player and return to School Lobby.

The Gargoyle asleep in The Cave

The Gargoyle upon being given a Fly Agaric Mushroom

The Gargoyle after being given a Centipede

The Familiar that has been summoned will thank the player for its being summoned before causing mischief throughout the town. Players must then find a way to stop the Familiar.

The Familiar will first be found in the Fungi Forest. It will begin to eat mushrooms in the forest, causing students to complain. Players must knock it from the sky by scaring it using Party Popper Magic.

Players must then talk to the Familiar at The Beach. The Familiar will then apologise before requesting to be sent back to it's own world. It will then return to the Magic Circle in The Plaza where the player must send it back using the Familiar Incantation.

The Familiar after being summoned.

The Familiar being knocked to the floor of the Fungi Forest

The Familiar after being caught at the beach

Sounds are heard coming from the cave although no one can find antything inside. Some students are speading rumours of an underground world. Players must discover the location of a Subterranean, he will then ask for a tour of the above ground world.

The subterranean will ask the player to take it sightseeing. First he will ask to visit "The Place Closest to the Sky". He will describe it claiming that it's a place where many have fallen victim to mushroom poisining. The player must then take him to the Fungi Forest.

After looking around the fungi forest the subterranean will ask to visit the "Cursed Cliff". He will describe it as a "Dating Mecca", saying that a man will link himself to his companion forever there. The player must then take him to Lovers Point.

After visiting Lover's Point, the subterranean will ask to visit "The House where Nobody Lives". He will describe it as a place where anyone who says a prayer there will become crystal clean like it's water. The player must take him to The Ruins.

After visiting the ruins, the subterranean and the player will return to the entrance of the cave. The subterranean will thank the player and state that he wants to return home before saying that there are many dangerous places above ground. He will then re-enter the cave before travelling back underground with an earthquake.

The unusual rock at the back of The Cave

The Subterranean asking to visit the closest place to the sky

The Subterranean visiting The Ruins
Add a photo to this gallery

Students will mention an individual appearing at the ruins playing a tune that they've not heard before that somehow sounds familiar.

The Satyr will next perform ???10 or ???32 to the player, and ask the player to bring a friend to perform that song with. The player can then come back with the same student they brought before, or a different student.

After performing these two songs with the Satyr, he will thank the player and perform a song he wrote about "time spent with [player]" and perform ???54 (). After he has finished playing ???54, he will leave and promise to visit again.

Students will begin talking about seeing a green creature near the lake, and seeing something floating in the water.

The player must visit the waterfall beside the cave, and wait to hear a splashing sound. The Kappa will then appear in the lake. If the player speaks to the Kappa, it will ask weather the player is a human. The player must answer yes, causing the Kappa to run away. This must be repeated on the next day.

The Kappa can only visit the inside of the school outside of class hours when no teachers are present. The player must then speak to the Kappa in the Entrance, the Classroom, and the Auditorium. The Kappa will then thank the player for showing them around before returning to the lake and completing the quest.

The Kappa first appearing to the player

The Kappa asking whether the player is human

The Kappa leaving the lake

The Kappa outside of the school

The Kappa inside of the school

The Kappa visiting the classroom
Add a photo to this gallery

Students will begin talking about seeing a giant shadow that had flown across the sky, landed somewhere in town, then gone to the cave. Students will mention hearing loud groans and roars from a beast hidden inside the cave, and hint that the creature will ask "who are you" with magic linguistics.

The player must discover the location of the Dragon. The Dragon can be found at the very back of the cave in a secret room, usually blocked by a giant purple rock.

Players can talk to other students for advice on which medecine they believe are strongest to heal from an injury. All 3 medecines can be bought and made at the Emporium.

Players must bring 3 different medecines one at a time to the Dragon. Players have to wait between 1 or 2 hours before the Dragon will ask for its second then third medecine.

The 3 medecine must be given in the precise order :

Once fully healed, the Dragon will then thank the player for helping it recover and leave.

The Dragon's silhouette shown at the start of Mystery Time

The Dragon communicating in magic linguistcs 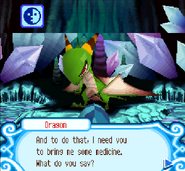 The Dragon asking the player for medecine

The fully recovered Dragon's departure
Add a photo to this gallery

Students will start talking about a creature resembling a dinosaur, that had appeared in town. Big splashing sounds and magic linguistics can be heard from inside the cave.

The player must find the location of Nessie. The creature will be hidden in the lake at the very back of the cave. Nessie only communicates in Magic Linguistics. For Nessie to appear, the player must use "Greeting" (basic), not in wizard form, when asked who they are. Nessie will then appear in the water.

The player may notice that Nessie's stomach growls several times. In Magic Linguistics, Nessie will ask the player to bring them a lot of fishes because they're hungry. The player must bring 3 or 4 fishes (any kind of fish) to feed the creature.

Nessie's silhouette shown at the start of Mystery Time 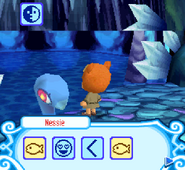 Nessie asking the player for fish

Nessie asking for the player to whistle

Nessie thanking and saying goodbye
Add a photo to this gallery

Students will start talking about a creature that had challenged them to a fight and about how they all lost. The creature is the Ogre that can be seen walking around town. Upon interacting with the Ogre, it will challenge the player to a fight, which is actually just to play Tag with it, but with its' own rules. The Ogre will vanish in purple smoke and the chase starts.

The Ogre will re-appear anywhere outdoors in town. The player must find the Ogre 3 times in a row in the same round. However, if the Ogre sees the player coming head on, the player will instantly lose to the creature.

Students will then indirectly reveal the solution to beating the Ogre. Without playing the Ogre's game, soem students have previously spooked the creature by coming or sneaking up behind it. The player must attempt to do so while playing Tag with the Ogre.

After catching the Ogre 3 times, the ogre will aknowledge the player, offer to play again some other time and vanish.

The Ogre's silhouette shown at the start of Mystery Time

The Ogre challenging the player

The Ogre caught the first time

The Ogre caught the second time

Students will begin telling the player about a strange drawn circular shape and pattern that has appeared in town at night, and that glows at that time. The Mystery Circle is located right next to the Plaza. Students would blame the drawn pattern on a prankster that would sneak out at night.

The Mystery Circle can only be interacted with at night, which means after 7:00 pm (19:00). Once the evening, the player must bring and hold out inside the Circle the object it illustrates. The first object is any fish that the player chooses. The symbol will then change to that of an insect, so the player must repeat the same course of action with any insect chosen.

After completing the two tasks, a spaceship will reveal itself and thank the player by changing the final symbol to a smiley face before disappearing.

The Mystery Circle's silhouette shown at the start of Mystery Time

The Mystery Circle's spaceship revealed
Add a photo to this gallery

Students will start saying "some weird thing popped up near school. It always gives you a riddle when you see it". The first one is said to be easy but the one's after are hard. When heading to school and going up the stairs, the player will be met with a huge roar coming from the Sphinx. The Sphinx will appear and present itself as "Sphinx, the keeper of knowledge", then ask its first question.

The first riddle is : "What has four legs in the morning, two in the afternoon and 3 in the evening?" To which the player must answer : "a person."

The final challenge is to "Blanket the world with flowers". The player will have to perform the Flower Rain Incantation as the third challenge. When the challenge is complete, the player must meet the Sphinx at the entrance of the woods.

The Sphinx will finally congratulate the player and teach them the Shooting Star Spell. The creature finally leaves and the mystery is resolved.

Add a photo to this gallery
Retrieved from "https://enchantedfolk.fandom.com/wiki/List_of_Quests_and_Mysteries?oldid=5200"
Community content is available under CC-BY-SA unless otherwise noted.